Tien-Shan Mountains
Nearly half of the 1.500 mile – long (2.500 km-long) Tien-Shan (Chinese for "Celestial Mountains") lie in Turkestan (formerly Soviet Central Asia), most of this in Kyrgyzstan. The northern fringe extends into Kazakhstan the southeast edge reached into Uzbekistan. Like the Dzhungar Alatau and Pamir Mountain system bordering it, the Tien-Shan marches on east-west lines. Tien Shan is an interesting place for climbers to make ascents of peaks located above 7.000 m, like Khan-Tengri (7.010 m) and Pobeda (7.439 m).
Marble Wall Peak
Marble Wall is a peak situated at an altitude of 6.400 m above the sea level, and included into Meridionalny range mountain system, at the Kazakhstan-Chinese border. No climbing is conducted right along the wall due to icefalls. The peak was named because of marble outcrop. In winter there is not much snow here as it is blown away by the northeastern wind. Day temperature in summer at the altitude of 2000 m is reaches +24 +26°C. At night the temperature falls down to +5 +8°C. The Marble Wall glacier is a source of two small rivers Ashi-Tor and Kesken-Tas, further confluence of which forms the river of Bayankol, flowing to the North. The Base Camp was named after the river.
Khan-Tengri
"Lord of the Sky" was the name given by the ancient Turks to one of the highest peaks of the Tien-Shan – Khan-Tengri. It is situated on the border of Kazakhstan and Kirgizia and reaches the height of 7,000m. Over thousands of years this peak was holy for the ancient Turks and even now it is associated with many legends and beliefs. Another its name is Kantau (“Blood Mountain”). The mountain received its name due the pink granite covering the peak. During the sunset it is getting a reddish tincture.The Turk-Mongolian tribes before adoption of the Islam professed their pagan religion – the Tengrianism. The Supreme God of this religion was God Tengri who determined a human fate and its lifetime. The ancient Turks believed that their Supreme God could only live at the peak of the world. Such peak for them was Khan-Tengri.The Khan-Tengri peak was described in many travelers’ articles, but it was explored for the first time by P.P. Semyenov Tien-Sahnsky, the famous Russian geographer of the XIX century. He described the peak as an aiquille of regular pyramid shape. In the opinion of many modern alpinists Khan-Tengri is the most beautiful peak in the world due to its nearly ideal right geometric form.The first mount to the peak was made by Mikhail Pogrebitsky, Boris Tyurin and Franz Zauberer in 1931. Pogrebitsky described a sunset in Khan-Tengi in his memoirs “… Khan-Tegri was blazing from above like a giant faceted ruby set in the dark turquoise sky…”To day, the alpinists from all over the world gather in training camps on the glaciers of Northern Enylchek (Kazakhstan) and Southern Enylchek (Kyrgyzstan) to train for the mount to Khan-Tengri. Up to now 25 mounting routes have been laid.The peak Khan-Tengri is considered to be one of the most hard-to-reach ones in the world. Not without reason the ancient Turks called it “The Lord of the Sky”. From point of view of its severe grandeur and arduous feature, it can only be compared with famous 8,000m- Himalayas, that is why KhanTengri is a trail of courage and craft for the alpinists from all over the world.
Dzhungariya
Dzungar Alatau is a mountain system, which occupies 700 sq. km, and is situated at the border of two big mountain systems Eastern Tien Shan and Altai. Dzungar Alatau is divided in two parts: region of the Lepsy river, and region of the Usek river. The highest summit is peak of Semenov-Tienshanski located at the Kazakhstan-Chinese border at the altitude of 4.622 m above sea level. Not far from the border there is a mountain pass with a width of 10 to 50 km called Dzhungarski Gate. Semi desert, which turns into steppe stretchs up to the altitudes of 2.600 m, above which there are Alpine meadows. A narrow ridge of Dzhungar Alatau with sharp peaks and steep slopes has lots of rocky precipices with a height of 400-1000 m. Above the altitude of 3.500 m the ridge is covered with eternal snow and glaciers. Mountain valleys are narrow and up to 800-1.000 m deep, most mountains are difficult to access.
The climate is temperate continental. Winter day temperature is -5-6°C, night one is -15-25°C. Summer day temperature is +20+25°C, night temperature is +5+7°C. The region is sparsely populated. The real masters of this wild region are red wolves, bears, Siberian stags, wild Chalyn rams, and countless rodents. Observant tourists will definitely meet one of these animals.Trekking is particularly good in the region of Lepsy, Baskan, Aksu lakes, around the mountain lakes Zhasylkol and Bolshoye. Mountains Kokpek, Taurly and Bezymyannyj passes, peak of Semenov-Tienshanski, Volchiy and Banditskiy passes are worth trekking as well. 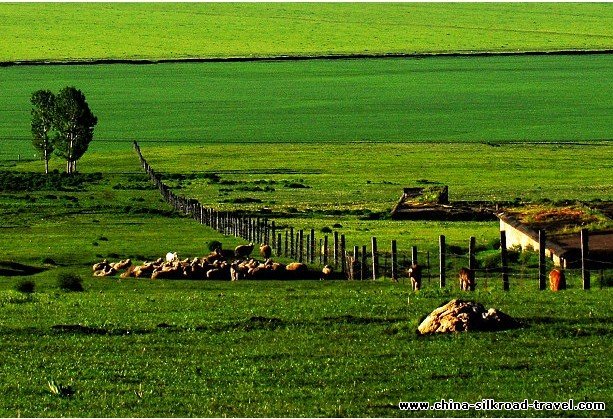 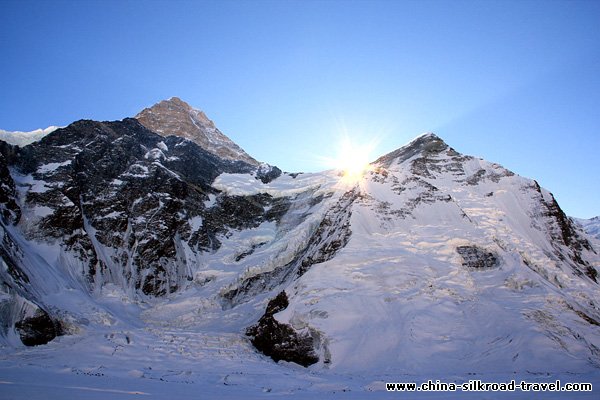