At the beginning of our era on the fertile lands, irrigated by the river, there sprang up the large trade-and-handicraft town Taraz. Up to the 12th century it was the economic, cultural and political centre of medieval state of Karakhanids. In 1220 Taraz was conquered by the hordes of Genghiz-Khan and was razed to the ground. At the end of 18th century near the ruins of Taraz the Kokands built the fortress. At the beginning of 19th century, not far from it, on the site of ancient Taraz, the city named Aulie-Ata (“holy aged man”) started its rapid development. Its first settlers were Uzbeks, those who came from Namangan.

The population of the town was occupied with handicraft and trade. During the spring fairs, hand-made goods and agricultural products by settled inhabitants of oasis were exchanged for products of cattle-breeding of Kazakhs-normads.

In 1864 Aulie-Ata entered the structure of Russia and was occupied by the Russian army. Through its territory there lay the route from Tashkent to Verniy and Pishpek. The town was settled with Russian officials and service men. In the Russian part of the town there were about 2 dozens of small industrial enterprises on primary processing of raw materials produced by agriculture, mainly, wool-washing and tanning industries. At the beginning of 19th century there existed one municipal and two parish schools and one Russian-Kazakh school. In the town there were more than 20 mosques and 3 churches. 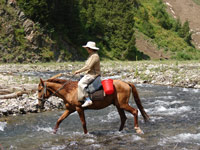 In 1938 the town was renamed to Dzhambul after the Kazakh poet Dzhambul Dzhabayev.

On January 8, 1997 by the Decree of the President of Kazakhstan N.A.Nazarbayev the immemorial name – Taraz was given back to the town.

In the town itself there were located caravan-serais, workshops of craftsmen, stores of merchants.

The heyday of the town's development date back to the 10-12th centuries, the evidence of it can be found in network of water pipes made of clay pipes, remains of architectural structures, pavements and paved streets, numerous hand-mades of skilful masters, which were discovered during excavations. The town’s bath-house also dates back to that period. The bath-house had fresco murals inside.

The second small mausoleum of 13th century – Sha-Mansur was built above the grave of one of the viceroys of Mongol Khans who was killed in 1262. The evidence of it is found in the inscriptions preserved on the stone plate inside the mausoleum.

According to the reports of Arab historian-geographer Makdisi, at the end of 10th century Taraz represented the large fortified town with numerous gardens and was densely populated.

Invasion of Tatars-Mongols at the beginning of 13th century was one of the reasons of Taraz’s downfall.
After the great geographical discoveries of 14th century the ancient caravan route lost its importance and this fact brought the commercial towns standing on this way (including Taraz) to final downfall.

There are two memorials located 18 km from Taraz which present particular interest for the scientists-researchers and tourists. They are situated not far from each other.

The first is mausoleum of Babadzha-hatun, which was built in 11th century, and it has the marquee dome of unique construction.

The second is mausoleum of Aisha-Bibi which dates from the 12th century.

It is the only in Kazakhstan unique memorial, entirely faced with carved terracotta with the richest ornamentation in the form of tiles with 60 kinds of patterns, cornices and styled inscriptions. Capitals and columns from terracotta blocks are covered as the entire wall with the thinnest paintings, which present the richest composition of motives of folk ornament. On one of the corner towers of mausoleum there preserved the lines from the old distich: “Autumn… Clouds… The Earth is beautiful”.