Home > China Tours > Gansu Tours >
Summary: Zhangye is famous for the Danxia Rainbow Mountain, explore the Jiayuguan Pass and the Buddhism Gem of Mogao Grottoes. Ride the camel in Sand dune in Dunhuang to experience the old Silk Road Caravan. 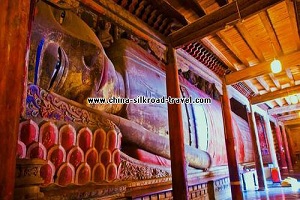 Today you will have the opportunity to traverse the ancient steps of Giant Buddha Temple, which is the important place of the Silk Road. Midway in the Hexi Corridor along the Silk Road lies the historic city of Zhangye, the centerpiece of which is the mysterious Giant Buddha Temple. Located in the southwest corner of Zhangye in Gansu Province, the Giant Buddha Temple is the largest architectural relic in Gansu Province of the Western Xia (1038-1227) period. China's largest reclining Buddha is well preserved in this temple.  then we will head to visit the Zhangye Danxia National Geological Park. which is 510 square kilometres in total, it located in the north of Qilian mountains, SuNa County territory. It includes the colour hills in Linze country ,ice hills, Danxia and GanZhou District and PingShan lake. The scenic Danxia, is a distance of 40 km from east Zhang Ye city, north from Linze county town by 20 kilometers, this is the most typical arid area of northern China.
Later on, you will be transferred to the train station to take the express train to Jiayuguan for rest.
Accommodation: In Jiayuguan 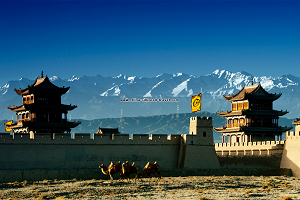 In the morning, visit the Jiayuguan pass. This Ming Dynasty fort guards the strategic Jiayuguan pass, at the western end of the Great Wall – this was the last section built by the Ming Dynasty. The Great Wall Museum opened to visitor in October 1989 and it is the first one to exhibit the Great Wall culture in a comprehensive and systematic way. visit the Weijin Tombs, which are ancient tombs of brick paintings dating back 265-420 AD. The wall paintings discovered are lifelike and succinct in style and cover a wide range of subjects including politics, economics, culture, military affairs, folk customs, and science and technology during the Wei and Jin periods. then train transfer to Dunhuang(Liuyuan station).
Accommodation: In Dunhuang 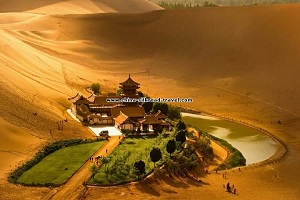 Morning tour of Mogao Grottoes, also known as the Thousand Buddha Grottoes, this UNESCO World Heritage site is one of the great artistic and religious wonders of the world and it is famous for its exquisite murals and various sculptures inside the caves, which was built in different dynasties, spanning 1,000 years of Buddhist art. then visit the Echoing-Sand Mountain and Crescent Lake.  tour will end at Dunhuang.
Echoing-Sand Mountain and Crescent Lake: Located 5 km (about three miles) south of Dunhuang City, the Echoing-Sand Mountain, for many Chinese well known as Mingsha Mountain, is celebrated for the sound of the moving sand. In 1994 it was acclaimed as the national key scenic spot. Together with the Crescent Spring and the Mogao Caves, the Echoing-Sand Mountain is most popular site in Dunhuang travel.You may wonder why the sand makes these different sounds. There is a legend that says how, in ancient times, a general with many soldiers came here to fight in a war with their enemies.