Home > China Tours > Gansu Tours >
Summary: Experience the Tibetan culture to Labrang Monastery, Wuntun Temple, Longwu Temple.The amazing landscape of Qinghai Lake, Danxia Rainbow Mountain. Enjoy the exciting desert safari in Badanjran Desert.Listen to the history of the silk road and the spread of Buddhism in Mogao Grottoes.The best route include Qinghai and Gansu Province for you to taste the west part of China. 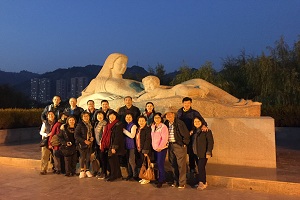 Pls arrange your international flight(or train) to get to Lanzhou, we will meet you at the airport(or train station) and transfer you to the hotel check in. if time permit, you will take a Lanzhou city tour,  visit the Yellow River’s Mother Statue, explore the ancient history and culture of Gansu Province. Waterwheel park, an ancient irrigation tool.
Accommodation: In Lanzhou 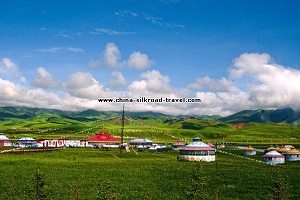 We will pick you up from the lobby of your hotel in Lanzhou in the morning and drive to visit the Binglingsi Thousand Buddha Caves which is close to Liujiaxia Reservoir, These caves stretch for 200 meters, were built during the Western Qin, North Wei, Sui, Tang, and Song, Yuan, Ming, Qing dynasties (between the 3rd and 18th centuries). then we will drive to Xiahe, visit the Sangke Grassland,  it is situated a short 14km from Xiahe. This vast expanse of grassy plains, covering an area of around 70 square kilometers, is a lonely, beautiful place that presents a nice change for those coming from the bustling cities, such as Chengdu or Lanzhou.
Accommodation: In Xiahe

After breakfast, we will visit the Labrang Monastery, after that, we will drive to Tongren, explore the Wutun Temple upon arrival.
Labrang Monastery: The Labrang Monastery is located at the foot of the Phoenix Mountain, northwest of Xiahe County in Gannan Tibetan Nationality Autonomous Prefecture, Gansu Province. As a propitious place in the hearts of the Tibetans, it stands by the Daxia River and faces the Dragon Mountain. A long time ago, this place was a boundless sea, which over time had turned into the present landscape. There is a beautiful legend that tells about how the Dragon Mountain, Phoenix Mountain, and the Daxia River were formed.
Wutun Temple: Located in the Tongren County of Huangnan Tibet Autonomous Region of Ningxia Province, the Wutun Temple is a temple of Lamaism. The Wutun Temple is at least 300 years old, but it is difficult to estimate when exactly it was built. The temple is a complex of Chinese and Tibetan culture. It has two gardens, the up garden and the down garden. One is 1.5 km away from the other. There are Da Jing Hall and the Sakymuni Hall in the Up Garden.
Accommodation: In Tongren 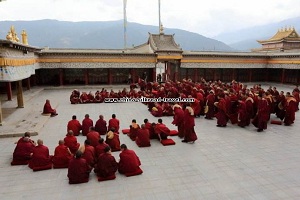 This morning we will start our trip at Longwu Temple, it was first built in 1301. It has a history of 699 years. Longwu Temple faces the east. It has grand architecture scale, stately model, and luxurious decoration. Afternoon, drive to Xining, have a good rest.
Longwu Temple: Longwu Temple was built around 1301 BC and belongs to the Sakya sect of Tibetan Buddhism. The temple is beginning to be discovered by visitors and currently, only a few visitors come for touring purposes. The Tibetan-style temple is backed by a mountain setting. Buildings are well arranged, and gloriously decorated.
Accommodation: In Xining 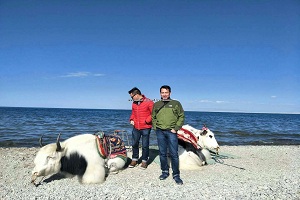 After breakfast, we will head to visit Ta'er monastary, thereafter, we will drive to our next strop, Qinghai Lake. after visit, back to Xining for rest.
Ta'er Monastery : Located 26km south of the Xining city proper, the sacred Kumbum Monastery, or Ta'er Si, is the best of the sights in the Xining area. The ancient monastery, built during the 39th year (1560 AD) of the reign of emperor Jiajing of Ming Dynasty, boasts a Tibetan name, Kumbum, which means a grand place housing 100,000 Buddhas. The sight is most sacred due to the personages who have graced it with their presence. It was originally built upon the birth place of the founder of the Gelukpa Sect (Yellow Hat) of Tibetan Buddhism, Tsong Khapa.
Qinghai Lake : This is the largest inland salt water lake in China. It is no exaggeration to say that Qinghai Lake is a miracle that is endowed by a deity. Outside, He encircled the lake with four continuous mountains and extends broad grassland at the foot of them. Inside, like a master baker, He decorated the water with many little islands. All these natural attractions come together perfectly to form a Xanadu on earth to win many tourists' favor.
Accommodation: In Xining

Today breakfast at the hotel, you will be transferred to the train station to take the express train to Zhangye. our professional guide and driver in Badanjran will meet you at the train station and we will drive to Badanjran Desert.
upon arrival, transfer to the hotel and check in.
The Badain Jaran Desert  is a desert in China which spans the provinces of Gansu, Ningxia and Inner Mongolia. It covers an area of 49,000 square kilometres (19,000 sq mi). By size it is the third largest desert in China.
Accommodation: In Badanjran 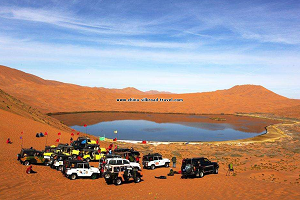 Today you will have the opportunity to explore the mysterious Badanjran desert and enjoy the different scenery and activities.
This desert is home to some of the tallest stationary dunes on Earth, with some reaching a height of more than 500 meters, although most average at around 200 meters. Its tallest dune is also measured, from base to peak, as the world's third tallest dune and highest stationary dune in the world.
The desert also features over 100 spring-fed lakes that lie between the dunes, some of which are fresh water while others are extremely saline. These lakes give the desert its name which is Mongolian for "mysterious lakes". It is also crossed by one river, the Ruo Shui ("weak water"), which has formed an alluvial plain in the desert.
Accommodation: In Badanjran

Morning enjoy your time in Badanjran, then we will meet you at the hotel lobby, and bus transfer to Zhangye city, meet  our local guide and driver. later on, we will take you to the hotel check in. Have a good rest.
Accommodation: In Zhangye 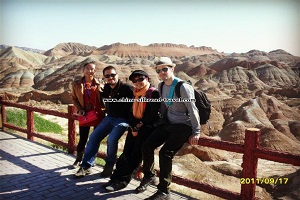 After breakfast, we will head to visit the Grand Buddha Temple, which is the important place of the Silk Road. then visit the Zhangye Danxia National Geological Park，which is 510 square kilometers in total, it located in the north of Qilian mountains, SuNa County territory. It includes the colour hills in Linze country ,ice hills, Danxia and GanZhou District and PingShan lake. The scenic Danxia, is a distance of 40 km from east Zhang Ye city, north from Linze county town by 20 kilometers, this is the most typical arid area of northern China. Afterwards, we will drive to Jiayuguan for rest.
Accommodation: In Jiayuguan 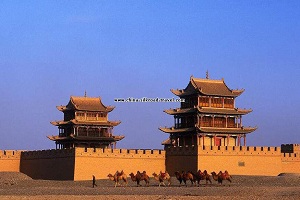 In the morning, visit the Jiayuguan pass. This Ming Dynasty fort guards the strategic Jiayuguan pass, at the western end of the Great Wall – this was the last section built by the Ming Dynasty. The Great Wall Museum opened to visitor in October 1989 and it is the first one to exhibit the Great Wall culture in a comprehensive and systematic way. visit the Weijin Tombs, which are ancient tombs of brick paintings dating back 265-420 AD. The wall paintings discovered are lifelike and succinct in style and cover a wide range of subjects including politics, economics, culture, military affairs, folk customs, and science and technology during the Wei and Jin periods. after visit, bus transfer to Dunhuang for rest.
Accommodation: In Dunhuang 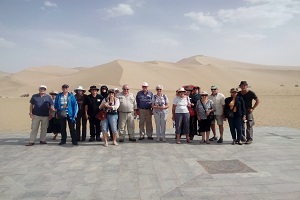 Morning visit the Mogao Caves, afternoon, visit Echoing Sand Mountaion&Crescent Lake. stroll around the Shazhou Night Market.
Mogao Grottoes, also known as the Thousand Buddha Grottoes, this UNESCO World Heritage site is one of the great artistic and religious wonders of the world and it is famous for its exquisite murals and various sculptures inside the caves, which was built in different dynasties, spanning 1,000 years of Buddhist art.
Echoing-Sand Mountain or “Mingsha Mountain” is one of the Four Great Singing Sands of China. Completely piled by sands, the mountain stretches for 40km in length and 20km in width respectively, with the highest point reaching 250m. When there is wild wind, the sands will be blown up and make loud sound, while the sound sounds like being produced by some ancient musical instrument when blew by breeze, hence the name. Surrounded by the Mingsha Mountain, Crescent Lake, is named after its crescent-like shape. According to historical record, the lake has been in existence for hundreds of years without ever being buried by the sand; it is really a geological wonder.
Accommodation: In Dunhuang

Breakfast at the hotel, then airport transfer based on your flight.