Home > China Tours > Gansu Tours >
Summary: Buddhism entered China along the ancient Silk Road,passed the Yumen Pass and Hexi Corridor.With the eastward dissemination of Buddhism,various forms of arts such as grottoes,sculptures,mural paintings.This route include all the most important grottoes. Maijishan Grottoes in Tianshui, Binglins Grottoes in Lanzhou,Yulin Grottoes in Qilian Mountain, Mogao Grottoes in Dunhuang, which are the rich and precious pooll of artistic treasures

Upon arrival,  be met and transferred to your hotel to check in. Then feel free at leisure for the rest of the day.
Accommodation: In  Tianshui 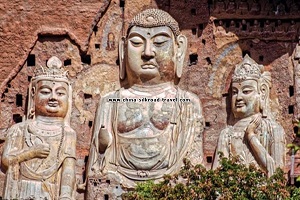 Morning our guide and driver will pick you up at the hotel, then we will be visiting the Maijishan Grottoes, Maiji Mountain is 150 meters tall, and it was named for its shape -- like that of a pile of wheat. According to historical records, the Maiji Grottoes were excavated during the Hou Qin Dynasty of the Sixteen Kingdom Period. The Maiji Mountain Grottoes have a long history. After that, we will visit the Fuxi Temple, is also known as Taihao Palace, as well as Renzhong Temple. Ten historic buildings in the temple include the theatrical stage, archways, the main gate, the instrumental gate, Congenital Temple, Taiji Temple, Bell Tower, Drum Tower, and Laihe Hall. Then, transfer to the train station to take express train to Lanzhou.
Accommodation: In Lanzhou 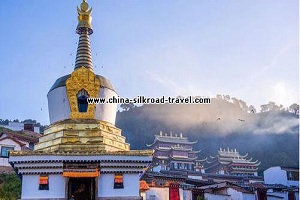 Morning breakfast at the hotel, then you will take a Lanzhou city tour, Visit Cruise from Liujiaxia Gorge to Binglingsi( fast boat), Binglingsi Thousand Buddha Caves, These caves, which stretch for 200 meters, were built during the Western Qin, North Wei, Sui, Tang, and Song, Yuan, Ming, Qing dynasties (between the 3rd and 18th centuries). Then visit the first bridge Of the Yellow River, also called Zhongshan Iron Bridge. It is a historic bridge erected 1907, known as the first bridge built on the Yellow River among those in the whole drainage area of the river in China. It is the first highway bridge in the ancient Yellow River, also the second city steel bridge in China. Then visit the Yellow River Mother Sculpture, which is located at the south bank of Yellow River in the city of Lanzhou. It is the regarded as best of its kind in China. The sculpture comprises a mother and a baby, the mother with long hair, slim figure, lying on the undulating water looking happy and kind. Resting on her breast is a small child smiling naively. The Waterwheel Garden, which is comprised of two waterwheels, a cofferdam, the recreation area and a house of water mill. if there are still some time after the airport transfer. The garden covers an area of 1.45 hectares (3.58 acres) and is comprised of two waterwheels, a cofferdam, the recreation area and a water mill house. After that, transfer to the train station and take express train to Zhangye.
Accommodation: In Zhangye 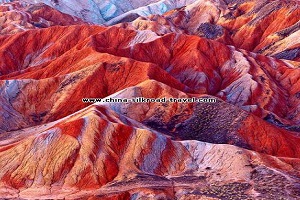 Today visit the Zhangye Danxia National Geological Park，which is 510 square kilometres in total, it located in the north of Qilian mountains, SuNa County territory. It includes the colour hills in Linze country ,ice hills, Danxia and GanZhou District and PingShan lake. The scenic Danxia, is a distance of 40 km from east Zhang Ye city, north from Linze county town by 20 kilometers, this is the most typical arid area of northern China. then visit the Grand Buddha Temple, which is the important place of the Silk Road. The temple is situated in the south street of Zhangye County Government in Zhangye. It’s a 9-story building and 32.8 meters tall.  Mounting to the top, you can have an overall view of the surrounding cities. Then we will drive to Jiayuguan.
Accommodation: In Jiayuguan 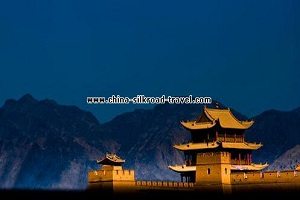 Hotel breakfast, then take you to visit the Jiayuguan pass which stands in the southwest part of Jiayuguan City, about 6 km away from downtown. Construction of the castle was started in 1372 in the Ming Dynasty, and is located in the Jiayu Highland, hence its name Jiayuguan Pass. It is situated between the Wenshu and Heishan Mountains at the foot of Jiayuguan Hill of the Qilian Mountain range. Then visit the Great Wall Museum, which is opened to visitors in October 1989, and it is the first museum to exhibit the Great Wall culture in a comprehensive and systematic way. The Museum covers an area of 12,312 square meters with an exhibition area of about 1,766 square meters. Its main building takes a shape of a typical signal fire tower on the Great Wall. After that, go to visit the Weijin Tombs, which are ancient tombs of brick paintings dating back 265-420 AD. The wall paintings discovered are lifelike and succinct in style and cover a wide range of subjects including politics, economics, culture, military affairs, folk customs, and science and technology during the Wei and Jin periods. Then drive about 6hrs to Dunhuang.
Accommodation: In  Dunhuang 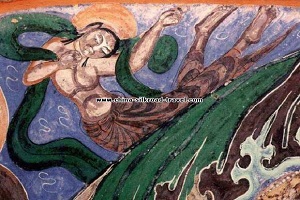 Morning tour of Mogao Grottoes, also known as the Thousand Buddha Grottoes, this UNESCO World Heritage site is one of the great artistic and religious wonders of the world and it is famous for its exquisite murals and various sculptures inside the caves, which was built in different dynasties, spanning 1,000 years of Buddhist art. Afternoon, visit Echoing Sand Mountain&Crescent Lake, Echoing-Sand Mountain, known as Mingsha Mountain to the Chinese, is 5 km to the south of Dunhuang and is famous for the constant sound of the moving sand. Legend has it that many years ago a horrific battle was fought here, and the sounds we hear today were the haunting cries of soldiers buried in the sand dunes. Situated within the Echoing-Sand Mountain Park, the Crescent Moon Lake is literally an oasis in the desert. The lake’s name derives from the crescent moon shape taken by the pool of spring water between two large sand dunes. Although the surrounding area is very dry, the pool surprisingly doesn’t dry up as one might expect.
Accommodation: In  Dunhuang

Airport transfer based on your flight schedule.