Home > China Tours > Gansu Tours >
Summary: Gannan Tibetan Autonomous Prefecture is one of the largest Tibeta people inhabitated except Tibet Provnice.This prefecture is the Tibetan religion and culture center of the Gansu Province. Magnificant Labrang Monastery, Langmusi Monastery where you will experience the authentic tibetan culture.breathtaking natural scenery along the way.we will arrange the tibetan family visiting so that you have the truely understanding of the mysterious minority. 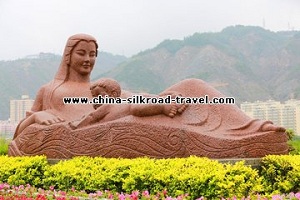 Pls arrange your international flight(or train) to get to Lanzhou, we will meet you at the airport(or train station) and transfer you to the hotel check in. Then we will visit the Yellow River’s Mother Statue. The Yellow River Mother Sculpture is located on the south bank of Yellow River in the city of Lanzhou. The sculpture is 6 meters long and 2.6 meters in height, and weighs more than 40 tons. The sculpture comprises a mother and a baby, the mother with long hair, slim figure, lying on the undulating water looking happy and kind. Resting on her breast is a small child smiling naively. The Yellow River Mother Sculpture reflects the long history and culture of Gansu Province. And then we will explore the  Waterwheel park.
Overnight in Lanzhou 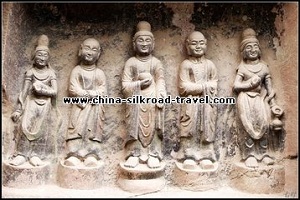 Breakfast in the hotel, we will drive to visit the Binglingsi Thousand Buddha Caves which is close to Liujiaxia Reservoir, These caves stretch for 200 meters, were built during the Western Qin, North Wei, Sui, Tang, and Song, Yuan, Ming, Qing dynasties (between the 3rd and 18th centuries). Located on a branch of Gansu part of the Silk Road, the Bingling Caves were started by Buddhist monks from as early as the West Jin Dynasty (265AD -316AD) although the official carving began in 420AD. Today there are 183 caves existing with 694 stone statues, 82 earth statues and murals of 900 square meters (9,688 square feet). Another pleasant surprise on your way to Bingling Caves is the beautiful Liujiaxia Reservoir. Then we will drive to Xiahe.
Overnight in Xiahe 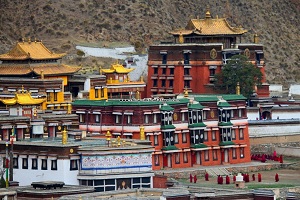 Morning you will be visiting the Labrang Monastery. : The Labrang Monastery is located at the foot of the Phoenix Mountain, northwest of Xiahe County in Gannan Tibetan Nationality Autonomous Prefecture, Gansu Province. As a propitious place in the hearts of the Tibetans, it stands by the Daxia River and faces the Dragon Mountain. A long time ago, this place was a boundless sea, which over time had turned into the present landscape. And enjoy the scenery of Songke Grassland, This vast expanse of grassy plains, covering an area of around 70 square kilometers, is a lonely, beautiful place that presents a nice change for those coming from the bustling cities, then we will drive to Langmusi.
Overnight in Langmusi 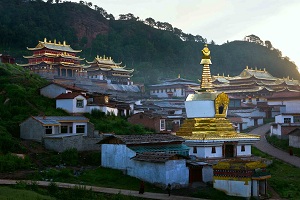 After breakfast, we will drive to visit the Langmu Temple. This small alpine town Langmu Temple is known as the tiger cave and the fairy in Tibetan. It was said that there was a fierce tiger in the cave of the canyon on the southeastern bank of Bailong River. And there was also a stalactite which is the spitting image of a slim fairy. There are lots of Buddhist ceremonies in Tibetan. The main Buddhist ceremonies at Langmu Temple are the sunning of the Buddha Festival and Living Buddhas’ teaching. Buddhist Tangka, shaidafo is a routine Buddhist ceremony which is held on the 15th of the first month in the lunar calendar, the Lantern Festival every year. One of the main pagodas of the temple lays the human body of the fifth Living Buddha, which is the best preserved one with longest time, though after more than two hundred years the skin of the Living Buddha is still elastic. Then we will drive to Hezuo. 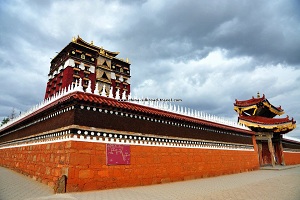 Morning breakfast at the hotel, then we will be visiting the Milariba tower, Milaripa is odd in the Tibetan world in that different spiritual leaders from varying sects are worshipped on each floor. The Milarepa's ground-floor is a powerful spectacle: a galaxy of Bodhisattvas, Buddhist statues and yak-butter lamps illuminating celestial figures. Then drive to Tongren, visit Wutun Temple, which is located in the Wutun village just outside of Tongren; the temple is divided into the "lower" and "upper" temple. This classically styled temple is filled with ancient Tibetan treasures: frescos and weavings. The temple is widely renowned across Qinghai; these two half-temples combine a comprehensive record of the religious history of Tongren and Qinghai. The Wutun Temple is at least 300 years old, but it is difficult to estimate when exactly it was built. The temple is a complex of Chinese and Tibetan culture. It has two gardens, the up garden and the down garden. One is 1.5 km away from the other. And tonight you will overnight in the typical Tibet local house
Overnight in Tongren 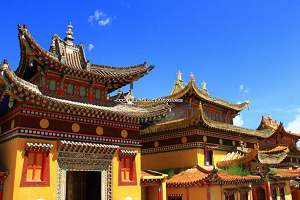 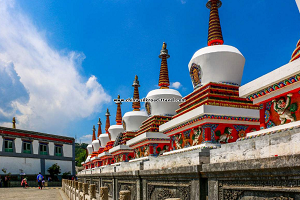 Morning we will take you to visit the Kumbum Monastery: Located 26km south of the Xining city proper, the sacred Kumbum Monastery, or Ta'er Si, is the best of the sights in the Xining area. The ancient monastery, built during the 39th year (1560 AD) of the reign of emperor Jiajing of Ming Dynasty, boasts a Tibetan name, Kumbum, which means a grand place housing 100,000 Buddhas. visiting The Beichan daoist temple. The sight is most sacred due to the personages who have graced it with their presence. It was originally built upon the birth place of the founder of the Gelukpa Sect (Yellow Hat) of Tibetan Buddhism, Tsong Khapa. Two of his disciples from this region also went on to become famous in the Buddhist world, one becoming Dalai Lama, the other the Panchen Lama, both great living Buddhas. The present Dalai Lama, now in exile in India, also studied and lived here.
Overnight in Xining

After breakfast, airport transfer based on your flight schedule.