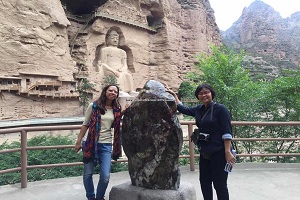 Today we will meet you at the hotel lobby, then you will have the opportunity to take a cruise by speed boat from Liujiaxia Gorge to Binglingsi to visit the Thousand Buddha Caves.  thereafter, we will drive to our next stop, Xiahe. visit the Sangke Grassland.
Bingling Thousand Buddha Caves: The Bingling Thousand Buddha Caves are on the cliff of Xiaojishi Hill. Located on a branch of Gansu part of the Silk Road, the Bingling Caves were started by Buddhist monks from as early as the West Jin Dynasty (265AD -316AD) although the official carving began in 420AD.
Sangke Grassland: it is situated a short 14km from Xiahe. This vast expanse of grassy plains, covering an area of around 70 square kilometers, is a lonely, beautiful place that presents a nice change for those coming from the bustling cities, such as Chengdu or Lanzhou.
Accommodation: In Lanzhou 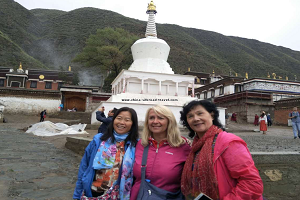 After breakfast, we will drive to Xiahe to visit the Labrang Monastery, then we will drive back to Lanzhou, you can do a Lanzhou city tour, visit the first bridge Of the Yellow River, it is the first highway bridge in the ancient Yellow River, also the second city steel bridge in China. Yellow River’s Mother Statue, explore the ancient history and culture of Gansu Province. Waterwheel park, an ancient irrigation tool. After that, tour will end at Lanzhou.
Labrang Monastery: The Labrang Monastery is located at the foot of the Phoenix Mountain, northwest of Xiahe County in Gannan Tibetan Nationality Autonomous Prefecture, Gansu Province. As a propitious place in the hearts of the Tibetans, it stands by the Daxia River and faces the Dragon Mountain. A long time ago, this place was a boundless sea, which over time had turned into the present landscape. There is a beautiful legend that tells about how the Dragon Mountain, Phoenix Mountain, and the Daxia River were formed.