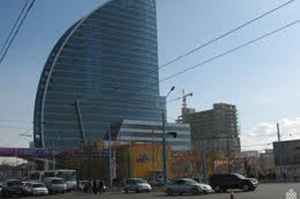 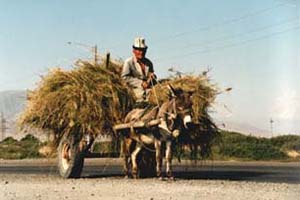 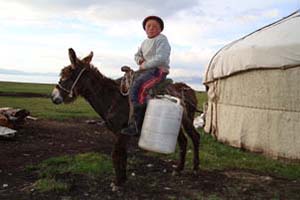 Transfer to Bayangobi place where one can find a combination of three different landscapes: Gobi Type (sand dunes), Forest and Forest-steppe. Local exploration by walking and visit Ovgoni Temple in Khogno Khan mountain.Visit Horse Breeding Family to have a close look to daily life of nomads, test traditional dairy products.Optionally: horse riding could be arranged at extra cost. Overnight stay in ger camp.

Drive back to Ulaanbaatar city. After lunch Shopping opportunity. In the evening: folklore show. 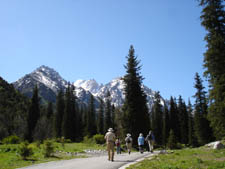 Flight to Bishkek. Upon arrival to the international airport “Manas” you will be met by “Ak Sai Travel” guide. Short drive to Bishkek city. Lunch in a local café. Transfer to Ala Archa Gorge (80 km).Ala Archa National Park located in a picturesque gorge of Ala Archa 40 km off from Bishkek. It is a popular place for hiking, skiing and mountaineering including trips to more than 20 glaciers. It covers the area of 200 km² - mostly forested valleys, waterfalls and rivers rich in trout. The altitude of ranges varies from 1500m to the highest point 4895m (Peak Semenov Tien Shanskii). Several rare species of fauna and especially traditionally revered juniper trees are under protection in the Natural Park. It has very diverse fauna: mountain meadows are the habitat for wild goats, deer and marmots. Ala Archa National Park is one of the few places of the habitat of the rare snow leopard.Transfer back to Bishkek city. Dinner in the local restaurant. Accommodation in a hotel. 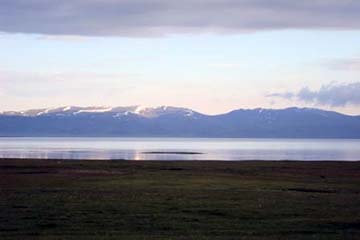 In the morning, after breakfast, one hour drive to Burana Tower (old minaret) near Tokmok city.That minaret was constructed in Balasagun town, one of the capitals of Karakhanid State existed in 11-12 centuries AD. Explore ruins of that important trading point at the Great Silk Road and visit a little local museum telling about that civilization. Also watch a collection of Balbals, Turkic ancient tombs. Optionally: You can watch a festival of horse back national games. From the ancient time horses played a big role for people in Kyrgyzstan. In the 3rd century people were even buried with their horses. Children were given the name of horses, because it was believed that evil spirits were afraid of horses. There are many horse games in Kyrgyzstan. The most widespread games are: Ulak Tartysh, Kyz kumai, Oodarysh and others.
After lunch continue our drive to Son Kul Lake.It is a fabulous mountain lake located in Tien Shan Mountain Range at the altitude of 3016m above sea level. Son Kul is used by the shepherds from Kochkor, Naryn and At Bashi regions as a jailoo – a pasture during the summer months. It is considered to be the pearl of Kyrgyz summer pastures. The route to Son-Kul winds through mountainous terrain until it seems to disappear into the very sky itself. This is probably why it is named Son Kul that from Kyrgyz translates as “the last lake”. 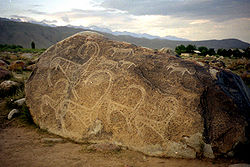 After breakfast transfer to Cholpon Ata town via Kochkor village.We visit a Handicraft Museum and a shop, where you can buy different masterpieces – starting from huge felt-silk blankets, finishing with small Christmas tree decorations.Optionally: If you want it is also possible to take part in “shyrdak show” yourself and try to make your own felt rug! We will watch how local people make felt, various carpets, embroidering and spinning, and other handicraft stuff.After lunch Continue our drive to Cholpon Ata town. Our route is going along the north shore of the Issyk Kul lake, the second largest alpine lake in the world after Lake Titicaca in South America.Measuring 182 km long by 58 km wide, the lake appeared as a result of volcanic activity. It is heated from below by thermal activity and never freezes even in the depths of winter. In the summer the water temperature reaches 25-28 degrees centigrade (warmer than the air) and you can swim in the lake enclosed on all sides by the snowy peaks of the Tien Shan Mountains. Extremely deep and nicely warm over the centuries the lake has been something of an oasis in this inhospitable mountain environment. With diverse flora and fauna Issyk Kul Lake and the surrounding environments are rightly considered to be one of Central Asia most remarkable locations.
In Cholpon Ata town we visit so called “Stone Garden” or Cholpon Ata Petroglyphs site.
Cholpon Ata Petroglyphs site is - a large open-air collection of rock carvings sometimes referred to as a Stone Garden, which covers some 42 hectares and contains a number of prehistoric monumental structures (stone circles, tombs, the remains of a boundary stone wall, Balbals) and Petroglyphs (dating from the II millennium BC thru the Middle Ages and up to the VI century AD).  The stones have plaques giving some information (a short description and a date), and there are several routes marked with arrows around the “stone garden.”  The shortest route in the Stone Garden takes 20-30 minutes. But there is a longer route to the upper side of the museum, which enables visitors to explore a collection of stone Balbals, stone inscriptions, stone circles and … a spectacular panorama of the Cholpon-Ata bay of Lake Issyk-Kul. 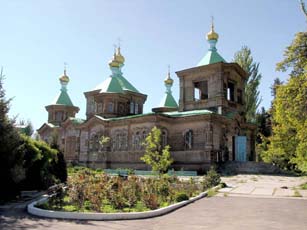 Optionally: In the morning you can go on an hour boat cruise in the lake to admire clear water of Issyk Kul with snow capped Tien Shan Mountains in the background! We have breakfast and get ready for a short drive to Karakol town.On our way we will stop to see the burial mounds of the Scythian period; we also visit the Museum of N. M. Przhevalski, the outstanding Russian explorer of Asian continent.
Karakol town is situated in the east of the lake area, at the foot of the most picturesque mountains of Tien Shan. This sleepy but very interesting Old Russian town was first erected by Cossacks in the middle of 19th century and became an important garrison settlement.
Upon arrival to Karakol you visit Dungan mosque, a unique construction in Chinese style, but serving as a mosque. Also you will see an Old Russian Orthodox Church – Holy Trinity Cathedral made of wood without any nails. You can also walk around the town to see the blockhouses of the 19th century, which were built in Russian style (white houses with blue windows) and sometimes called “ginger man” or “doll houses”.After lunch transfer to Djety Oguz Gorge for short excursion.Djety Oguz in Kyrgyz means “Seven Bulls”. This picturesque gorge is named so because of the red rocky sand formations covered with forests of Tien Shan spruces.Optionally: In the late afternoon you can also visit a Hunting Birds Performance on the one of the mountain slopes. We can offer you a Golden eagle hunting show where you will meet a hunter, talk to him, learn more about the life and hunting with different types of birds of prey. It is possible to imagine yourself a hunter and take a photo with the bird. There is a wonderful opportunity to see the Eagle flying, returning to the arm of the hunter and catching a rabbit or a fox. 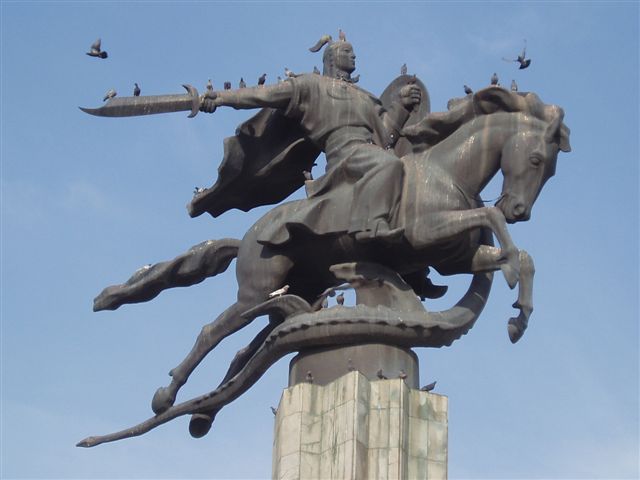 After breakfast transfer to Bishkek.Our way to Bishkek goes through tight Boom Gorge where boisterous Chu River, so much loved by rafters (routes up to 6th category difficulty!), cuts its way, it passes northwards and then enters the wider Chuy valley. Boom Gorge is an antecedent gorge between Chuy and Issyk Kul Province of Kyrgyzstan. The gorge cuts, in a general north-south direction, across one of Tian Shan's mountain range systems. The range east of the gorge is known as Kyungey Ala Too, the one to the west is the Kyrgyz Range. The Bishkek-Tokmak-Kemin-Balykchy highway (A365) passes through the gorge, as does the railway from Bishkek to Balykchy.Upon arrival to Bishkek city sightseeing tour.
The Capital and Industrial Centre of Kyrgyzstan, Bishkek is a city of wide avenues, handsome buildings and Soviet heritage. The Gesturing Statue of Lenin can still be seen in the city’s vast central square, yet it is the permanently snow capped Kyrgyz Alatau mountain range which towers over Bishkek providing a quite stunning backdrop. We will visit Manas Monument, the main national hero of the Kyrgyz people. Then excursion to the State History Museum and walking tour around main Ala Too Square to watch ceremony of changing of the Guard of Honor.
We also will visit Kurmanzhan Datka Monument, main governmental buildings, Old Square with Parliament House and the only survived in Central Asia Lenin’s Monument.

Bishkek to your destination

Early morning transfer to airport to catch the flight back home.