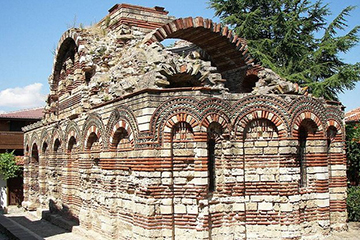 Church of the Archangels

Drive to Lagodekhi at 13:00 to pick up new members of your group from the border with Azerbaijan. It will take about 30 – 40 minutes. Afterwards drive to Kvareli. We will visit wine cellar called “Gvirabi”- tunnel. This unique wine cave represents the tunnel that is cut off in eth stone massif of Caucasian mountain range, where yearlong natural temperature is 10-12ºC. The length of this construction is 7, 7 Km. The next spot is Gremi Monastery the 16th century architectural monument – the royal citadel and the Church of the Archangels – in Kakheti. Afterwards we drive to Telavi. Overnight in Telavi hotel. 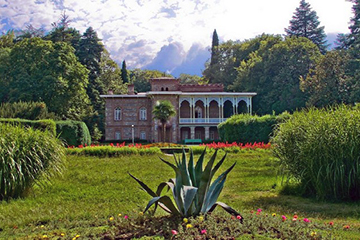 Visit House Museum of Prince Aleksandre Chavchavadze, with beautiful garden and wine cellar, where we will taste 5 sorts of wine. Alexander Chavchavadze inherited this village, lying in the Alazany River valley, from his father, Prince Garsevan. He refurbished the estate, constructed a new Italianate palace and built a decorative garden in 1835. It was the place where Chavchavadze frequently entertained foreign guests with music, wit, and – most especially – the fine vintages made at his estate winery (marani). Familiar with European ways, Chavchavadze built Georgia’s oldest and largest winery where he combined European and centuries-long Georgian winemaking traditions. The highly regarded dry white Tsinandali is still produced there. Afterwards drive to Signagi. On the way visit Bodbe monastery of St. Nino. According to Georgian tradition, St. Nino, having witnessed the conversion of Georgians to the Christian faith. Have Signagi city tour and lunch time and drive to David Gareji.3 David Gareji is one of the most important landmarks of Georgia. This site is characterized by a unique combination of historic architecture, prehistoric archaeological sites, rich paleontological fields and important bio-geographical features widely spread within the arid and semiarid landscape of the river Iori plateau. The dozens of cave monasteries decorated with unique frescoes are the best examples of harmonious interaction of man-made structures with the dramatic landscape. They bear the traditional principles of sustainable living and are considered as the masterpieces of Georgian Medieval art. In the evening drive back to Tbilisi. 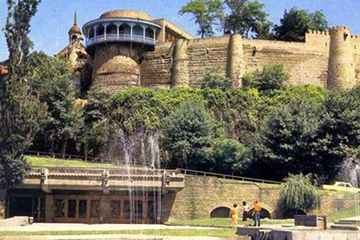 Drive to Mtskheta (UNESCO Heritage Site), an ancient capital of the Georgian Kingdom from the 3rd century BC to the 5th century AD. Jvari Monastery (6th c.); Svetitskhoveli Cathedral built in the 11th century. Drive back to Tbilisi. We will visit the Old Tbilisi Sulfur Baths, Georgian Orthodox and Armenian Gregorian churches, and a Jewish synagogue and a Turkish mosque side by side, reflecting Tbilisi's acceptance and tolerance of different religions. We can also see a recent monument, the Tbilisi Sameba Cathedral, the largest cathedral in the Caucasus. Tour includes following sights: Metekhi Church is erected on the cliff, overlooking the Mtkvari River. The colorful Darejani Palace is also situated on the cliff, like the nest of a swallow. The Sulfur Baths are located in Old Tbilisi, on the other side of the river, opposite Darejani Palace. The Orthodox Narikala St. Nikolas Church is in the same district. The church is furnished with frescoed portraits of martyrs and scenes from the Bible. It is wrapped in a defensive Narikala fortress, established in the fourth century. At Leselidze Street, we come across the 13th century Armenian St. George Church and a Jewish synagogue with an elegant facade. On the opposite side of the street is Sioni Church, leading to the bank of the Mtkvari. Here you discover Shardeni Street with its fashionable cozy cafes and art galleries. Walking we will come across the Anchiskhati church, the oldest church in Tbilisi keeping the miraculous icon of Jesus Christ.  Finally the tour takes you to Rustaveli Avenue, where attractions such as the Tbilisi Opera and Ballet Theatre, the Parliament, Rustaveli Theatre, different art galleries and cafes will draw your attention and provide a cosmopolitan atmosphere. Visit national museum to see wonderful Golden treasury and drive to Open Air Ethnographic Museum, place, where are built all kinds of Georgian national old country-houses and castles. 20:00 folk dinner at National restaurant in Tbilisi. 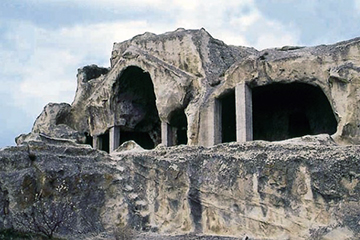 After breakfast drive to Gori. The city was founded by one of the greatest kings of Georgia, David the Builder (1089–1125). Visit The Joseph Stalin Museum in Gori. Afterwards visit Uplistsikhe, "the lord's fortress", which is an ancient rock-hewn town in eastern Georgia. Built on a high rocky left bank of Mtkvari River, it contains various structures dating from the 2nd ML BC to the Late Middle Ages, and is notable for the unique combination of various styles of rock-cut cultures. Afterwards drive to Borjomi. Have a stop to taste the Borjomi natural mineral water. Drive to Akhaltsikhe. Visit Rabati. A wander around Akhaltsikhe’s Rabati (old town), with its multicultural architecture, is well worthwhile. This district is on a hill on the north side of the Potskhovi, just west of the bridge. Rare examples of darbazebi (traditional Georgian houses) cluster around the castle, which was built in the 12th century and houses a mosque from 1752 and the ruins of a medrese (Islamic school). The Rabati also has a synagogue, an Armenian church and a Catholic church. 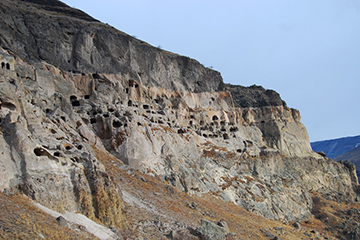 After breakfast drive to Vardzia. Vardzia, a rock-hewn complex on the left bank of the river Mtkvari was founded in the 12th -13th c.c., during the reign of Giorgi III and Queen Tamar. Initially planned as a town-fortress, the complex became a well-fortified monastery, which had a significant role in political, cultural, educational and spiritual life of the country. In the middle of the complex there is a Church of Assumption, richly decorated with mural painting. Afterwards drive to Kutaisi. In Kutaisi we will visit Bagrati Temple and Gelati Monastery (12th c. UNESCO heritage) and of course the new building of Parliament. Kutaisi was the capital of the ancient Kingdom of Colchis. Archeological evidence indicates that the city functioned as the capital of the kingdom of Colchis as early as the second millennium BC. It is widely believed by historians that when Apollonius Rhodius was writing about Jason and the Argonauts and their legendary journey to Colchis, Kutaisi/Aia was the final destination of the Argonauts and the residence of King Aeëtes. From 978 to 1122 CE Kutaisi was the capital of the united Kingdom of Georgia, and from the 15th century until 1810 it was the capital of the Imeretian Kingdom. From the end of 2012 Kutaisi became the Parliament City of Georgia. The new building of Parliament is designed by the Spanish architecture Alberto Domingo Kabo. 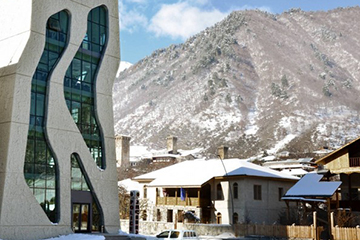 After breakfast drive to Zugdidi. Visit Dadiani Palace. The representatives of Dadiani Dynasty were acquainted with world history, culture latest technical achievements. They were tightly involved in the social events. The Palace keeps 41 000 museum objects. Most of them are unique and invaluable examples of Georgian and foreign art. It's time to get ready for the most exciting part of the trip - a journey to Svaneti, the region of the highest mountains and glaciers and the most abiding ancient traditions. Take some snacks for the long road, we will not stop for lunch before arrival to Mestia, but here the great surprise is awaiting us, we will visit small family trout farm and taste for the lunch real Georgian trout, which our host will prepare for us on fire. 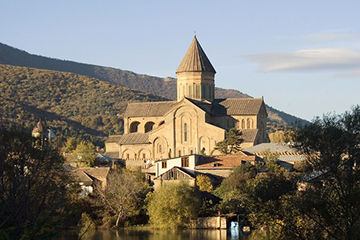 After breakfast drive to Ushguli by Jeeps. Visit Laghami Saint George's church (7th-12th c.c.) and Svan dwelling complex. Visits to the church of St. George in Nakipari (1130 AD) and Ethnographic Museums in Ushguli. Ushguli is considered to be the highest populated place in Europe (2200 m above sea level). 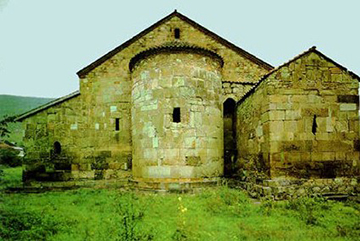 After breakfast visit Latali and Lenjeri single-nave basilicas of the 8th-9th-14th c.c., built by stones without ornamentation, with the interior richly decorated with murals. Afterwards drive to Batumi the most beautiful city of Georgia. En route we visit Enguri Dam with the height of 271 meters (the highest dam of this type in the world). The Dam makes a water-storage reservoir in the picturesque gorges of Samegrelo and Svaneti mountains. Have a free time in Batumi to take a walk across the beach in a famous Batumi boulevard.

Have free morning in Batumi. 12:00 check out from the hotel and drive to Batumi Botanical Garden. Afterwards drive back to Tbilisi.

Tbilisi to your destination

1 All  dinners, and breakfast on the train
2 Personal expenses, tips to the guide and driver.
3 Some activities such as boat cruise, camel riding, ect
Silk Road & Central Asia