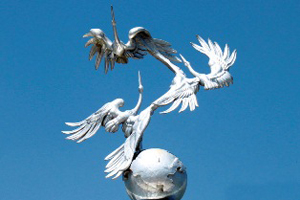 Arrive in Tashkent. Upon arrival, meet and transfer to the hotel for check in at 14:00PM and rest after long flight. 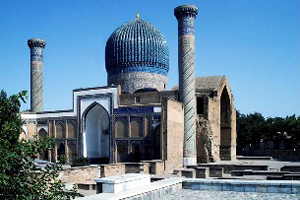 After breakfast transfer to the railway station and take “Afrosiyob train” (08:00 – 10:40)to Samarkand is one of the ancient cities in the world, contemporary of Athens, Roma and Babylon. Samarkand is more than 2500-years old. On the East Samarkand calls as “precious pearl”, appearance of the earth”. Guri-Emir Mausoleum and burial vault of Timurids dynasty from far away remembers a blue tulip with closed turquoise petals. Registan Square is a heart of Samarkand. The square appeared many times before the Mongols invasion (18th century) as a place of city craftsmen and tradesmen crowding. The word Registan means “place on the sand”.
You will also visit Bibi-Khanum Mosque (15th c.) and Shakhi-Zinda Architectural Ensemble (10-19th cc.) that consists of several mausoleums.Overnight at hotel 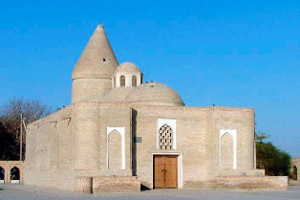 After breakfast drive to Bukhara via Gijduvan city where you will visit Madrasahs of Ulugbek and Abdukhalil Gijduvany. We will visit a family that engaged in production of ceramic pottery and will take part in the production process. Continue driving to Bukhara.On arrival, transfer to your hotel and check-in. Afternoon, visit some sights of Bukhara.
Bukhara city also called “holy” or “blessed”. Monuments of Ancient Architecture in Bukhara are unique. Bukhara had been one of the most important trade centers on the Great Silk Road during many centuries, that is why there are majority of caravanserais and covered bazaars which attract tourists till our days. Precious Stone of the Treasure of Central Asia is Samanids Mausoleum (9-10th cc.) which impresses by its ornament and brickwork.
Visit, also, Chashmai Ayub Mausoleum & Bolo Khauz mosque and Ark Citadel. Overnight at hotel 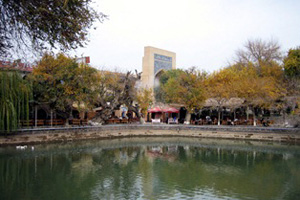 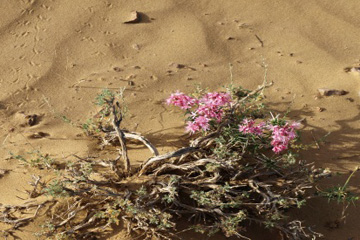 Breakfast at the hotel. Drive to Khiva via Kyzyl-Kum desert. Arrival in Khiva by evening time. Check-in to the hotel and overnight. 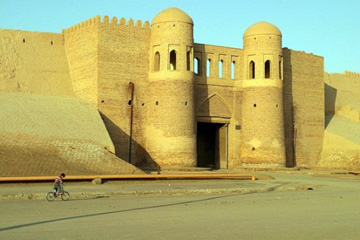 After breakfast start panoramic excursion along Khiva – one of the cities of the Great Silk Road which is well kept. Previous capital city of Khiva khanate of 17th century even today keeps that mysterious atmosphere of the ancient eastern city. It is especially can be felt in the old part Ichan-Kala where a lot of historical-architectural monuments are situated. While walking in the labyrinth of narrow streets you will nearly find yourself in another epoch with palaces decorated with mosaic, mausoleums, mosques and madrasahs built of clay bricks. There are many columns and entrance doors around wonderfully and richly decorated by wooden carving – the art which was popular in Khiva from ancient times. Especially you will be impressed by the Old Fortress Ark, Tash Hovli Palace, Djuma Mosque (Friday mosque) and Pakhlavan Mahmud Mausoleum. From far away you can recognize silhouette of Islam Khodja minaret. Many architectural buildings of Ichan-Kala city had been constructed at the period from the end of 18th century to the beginning of 19th century. Khiva is included into the list of world heritage of UNESCO.After sightseeing, transfer to Urgench airport for flight to Tashkent by HY- 1058 flight (21:00-22:20). Upon arrival, meet and transfer to the hotel for overnight. 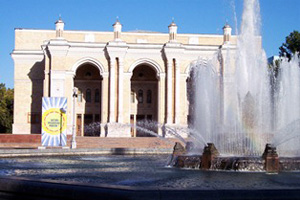 Breakfast at hotel. Check out of the hotel at 12:00PM. In the afternoon, sightseeing in Tashkent.You will visit a wonderful complex Khasti Imam located in the old part of the city which had being the biggest center of Islamic culture in Uzbekistan during thousand years. You will also have an opportunity to visit Local Bazaar Chorsu. This bazaar is one of the biggest and popular one in the capital. Under seven domes covered with colored ceramic piles there are pavilions where farmers sell products of own production. Here you can feel aromas of different eastern spices, vegetables and fruits.  You will have some time for shopping. Also, visit Kaffal ash-Shoshiy Mausoleum, Kukaldash, Barak khan and Abulqosim Madrasas.Besides eastern atmosphere, Tashkent also has elements of modern city. By Tashkent metro we will reach the center of the city when we can see Amir Temur Square, Independence Square and Alisher Navaiy Theatre Square.Farewell dinner at local restaurant.
Transfer to Tashkent International Airport for the departure flight to the next destination.