Yangguan Pass is a crucial gateway to ancient Chinese land transportation and the necessary pass of the Silk Road. It situated at the border of Nanhu village, 70km to the southwest of Dunhuang proper, with the result that it's called Yangguan Pass according to traditional Chinese statement of the south of a hill or north of a river to be " Yang. "
Yangguan is famous all over the world because of the ancient poem "Oh, my friend, I sincerely entreat you to have another cup of wine; you will see no more friends west out of the Yangguan Pass" by Wang Wei, a famous poet in Tang Dynasty (618 - 907). Nowadays, Ancient Site is a spot on the western line of Dunhuang. Most tourists will come here to see the Guansui ( the beacon of the border ).

Basic Facts of Yangguan Pass
· Yangguan was one of two significant strongholds (the other one: Jade Gate ) for the Han Dynasty (206 BC – 24 AD) to defend the invasion of the nomadic people.
· Yangguan Pass, also known as Yangguan Museum, is located on the west side of Dunhuang City. It is a scenic spot built based on the ancient Yangguan Site.
· Yangguan and Yumen pass were both crucial passes of the silk road. It is also an essential gateway between the central plain and Europe and Asia.

The History of Yangguan Pass:
Yangguan was built in the period of Emperor Wu of the Han Dynasty. In ancient times, Yangguan had plenty of water 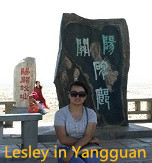 sources. Wo Wa pool and Xitugou were the most significant independent water sources. At least three or four thousand years ago, it had become an oasis basin with a developed fire burning ditch culture ( Huoshaogou ).
As early as 121 BC, the Western Han Dynasty set up four counties in Hexi Corridor, namely Wuwei, Zhangye, Jiuquan, and Dunhuang, as well as Yangguan and Yumen Pass, to resist the invasion of Huns.
Since the Western Han Dynasty, past dynasties have taken this place as an essential military area and sent troops to guard it. Many soldiers have been here to defend the war. Merchants, monks, envoys, and tourists have passed here and written immortal poems.
After being abandoned in Sui and Tang Dynasties, Yangguan was gradually desolate. The original Pass town will never be seen nowadays except for remnant Beacon Tower, being 4.7m tall, 8~7.5m long and wide for its bottom and 8~6.8m long and wide for its rooftop, Being left in actual existence on Dundun Mountain. Sightseer will have a view of all in the circumference of meters while standing on the beacon tower. As a result of it, it's called the "eyes and ears of Yangguan Pass."

Archaeological Research on Yanguan Pass:
No ancient Yangguan Pass town can be found nowadays. As for its original location, there are different versions of the story. As stated in "Kuodi Record," "Yuanhe Annals" as well as "Huanyu Records" that Yangguan Pass lying at li to the west of Shouchang county in Shazhou; in "Xin Tang Shu (New History of the Tang Dynasty ) geography" that "another route going to the old town of the Yangguan Pass from the place at 10li to the west of Shouchang county in Shazhou". As recorded in the hand-copied "Shazhou Atlas " stored in Paris that Yangguan Pass "lying at ten li to the west of the county and only remains of it kept in actual existence. As a result of it, the particular location of the original Yangguan Pass should be at ten li to the west of the ancient Shouchang county, namely the "GudongTan (curios beach) because of the small river basin and remains of the old enceinte, etc. there. The natural conditions there are suitable for living. The nowaday Yangguan Pass may be a large beacon tower nearby the original real one because of no signs indicating that it had ever been an impregnable pass in ancient times. Yangguan Pass, being under the jurisdiction of Yangguan Douwei (the title of the military officer subtler general ) in the Han Dynasty, was a vital frontier pass as well as the only way for the southern route of the Silk-road to pass through. The Yangguan county ever being set up by the Jin Dynasty was abolished after the Tang Dynasty.

Must see in Yangguan Pass:
Yangguan Pass, also known as Yangguan Museum, is located on the west side of Dunhuang. It is a scenic spot built based on the ancient Yangguan Site. There are some old buildings and exhibition halls in the scenery, which shows many cultural relics and historical sites on the ancient Silk Road. 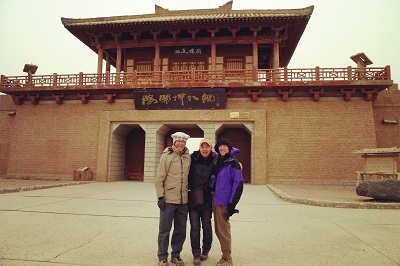 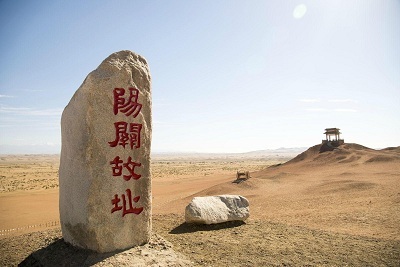 1. Curios Beach:
No name of Gudong Tan ( curios beach ), situated in the west of the farmlands, north of Yuantaizi Mountain, east of Qingshanzi Ridge, as well as south of Dundun Mountain, could be found from historical records. The boundless quicksands stretch to the horizon. 20-odd arrays of inartificial sandbanks are being formed from south to north naturally. Some grit and flats together with relics of ancient weapons, currencies, tools of production, living articles, adornments and antiques of wares, etc. exist in sandy trenches. The remains of houses, kilns, cob walls, farmlands, and ditches also are found here. The name of Gudong Tan(curios beach) comes off the plenty of sites of ancient people and exposed cultural relics there. It's the site of the Han's Yangguan Pass or the seat of Yangguan county after the Han Dynasty considered by the historian. The bright and orderly arranged foundations, as well as wall base with intermittently width and area of over 10000 square meters nearby the Yangguan Pass, represent the prosperity of it in recent days. Xuan Zang, known as the hierarch in the Tang Dynasty, entered into Yangguan Pass after coming back from India with sutras. Yangguan Pass nowadays becomes the pronoun of the first desolate frontier pass. Frequent wars, excessive reclamation, and cultivation in history deteriorated the vegetation, water source, and the environment there. With the result that residents here gradually migrated to other places after the times of the Song and Liao Dynasties. The original prosperity of both Yangguan Pass and ancient Shouchang town had been covered with hardhearted and rolling quicksands after the Yuan Dynasty.

2. Beacon Tower
When you arrive at the relic's site, you will see a solitary beacon tower at the top of the dundun mountain on the north side of the antique beach—no trace of anything else due to natural erosion. However, photographers love taking pictures of it for artistic reasons.

3. Tablet Gallery
On the towering dundun mountain of the beacon tower, a famous inscription corridor has been built. Walking in the gallery, you can not only enjoy the poetry and calligraphy of contemporary celebrities but also overlook the ancient Yangguan site and the natural scenery of oasis, desert, and snow peak.


Best Time to Travel to Yangguan Pass:
Because of the temperature difference between day and night in the Yangguan area, from May to October is the best time to travel to Yangguan.
Meanwhile, Every Morning and Evening is the best time for tourists to visit the site is by either sunrise or sunset. The scarlet sunlight turns the desert into a sea of 'fire,' a reminder that there was a fierce battlefield. Come to the scenic area between 17:00 and 18:00. After a one-hour visit to the museum, you can head to the relic's site straightly for the sunset.

b) Go to Yangguan Pass by Air
· Driving from Dunhuang airport to Yangguan Pass is 75km( about 1hour and 20 mins ).
· Dunhuang Airport is one of the civil airports in Gansu Province, located in Mogao Town, Dunhuang City, Gansu Province (12 kilometers east of the city). It is an important regional tourism airport in China. At present, regular airlines from Dunhuang to Lanzhou, Xi'an, Beijing, Jiayuguan, Urumqi are available, 38 flights each week.

c) Go to Yangguan Pass by Train
· Driving from Dunhuang Liuyuan Railway Station to Yangguan Pass is 200km ( about 3hrs and 16 mins ).
· Take the train to Dunhuang ( the train fare is 300-500 CNY/pp include tax ).
· Dunhuang Liuyuan railway station - located 128 kilometers away from the northwestern part of Dunhuang city. Visitors can take trains from Dunhuang to Beijing, Shanghai, Xi'an, Chengdu, Lanzhou, Urumqi, and other ten cities. Shuttle buses bound for the downtown area are within reach day and night. It will take you about two hours and cost you CNY 15.

The Relationship Between Yangguan Pass and the Silk Road
To the Silk Road, you will go through Dunhuang, and to Dunhuang, you must go to Yangguan. Speaking of Yangguan Pass, we have to mention its relationship with the silk road. When the silk road opened up, the caravans started from Chang'an, went to Dunhuang for supplies, and then started from two passes, Yangguan Pass being one of them. After passing Yangguan, the caravan crossed the desert and reached Shanshan (today's Ruoqiang in Xinjiang), Yutian ( Khotan ), then, moved to Congling ( Pamir Plateau and Karakoram Mountain ) to Anxi ( Iran plateau and Mesopotamia), then joined the caravans from Yumen pass, then to Europe.

Related Tour Package to Yangguan
Day Tour to Yangguan and Yadan Ghost City
This private day tour will take you to explore the best of Dunhuang. You will follow the footsteps of ancient Silk Road to admire the Yangguan Pass, Discover the mysterious Yadan landscape...More
China Tours
Silk Road Travel Guide
Contact Center