Xinning & Haidong
Brief Introduction of Xining:
The city was a commercial hub along the Northern Silk Road's Hexi Corridor for over 2000 years, and was a stronghold of the Han, Sui, Tang,
and Song dynasties' resistance against nomadic attacks from the west. Although long a part of Gansu province, Xining was added to Qinghai in 1928. Xining holds sites of religious significance to Muslims and Buddhists, including the Dongguan Mosque and Ta'er Monastery. The city lies in the Huangshui River valley, and owing to its high altitude, has a cold semi-arid climate. It is connected rail to Lhasa,  Tibet and connected by high-speed rail to Lanzhou Gansu and Ürümqi, Xinjiang. 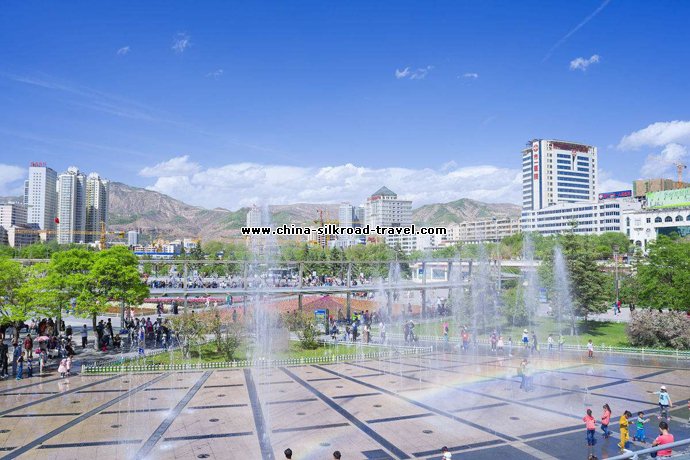 Popular attractions；
1. Ta’er Lamasery
As the biggest monastery of Tibetan Buddhism in Qinghai Province, Ta'er
Monastery comprises of the Han and Tibetan art styles with more than 1,000 yards and 4,500 halls and temples such as the Great Golden Roof, the Small Golden Roof. The Longevity Hall, the Great Hall and Ruyi Tower. Ta'er Monastery is rich in fascinating arts. The famous murals. the barbolas. And the butter sculptures are considered to be the three most unique arts of superb craftsmanship. 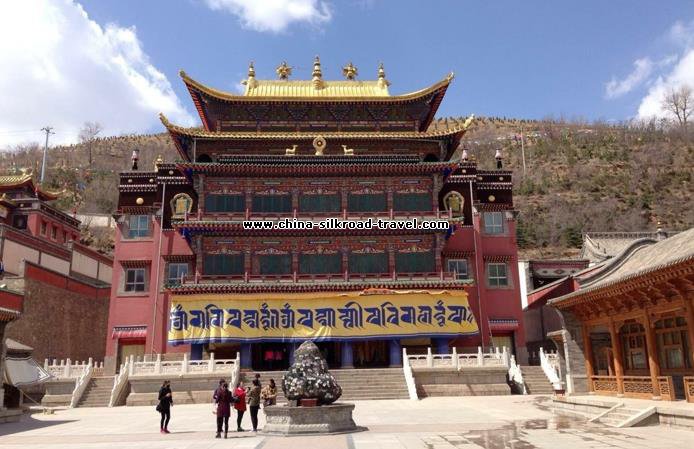 2. Dongguan Mosque:
Dongguan Mosque is the perfect combination of the ancient Chinese architectural features and Islamic style. It is comprised of the Mosque Gate, Ceremonial Gate, Enlightenment Tower, and Prayer’s Hall. The building Is decorated with carved beams and painted roof. It is resplendent, magnificent, very bright and spacious. It can accommodate more than 3,000 Muslim prayers.


3. Ma Bufang Official Residence:
Ma Bufang Official Residence, known as "Sweet Cottage formerly was the private residence of Ma Bufang and later was kept as a museum. The Residence is comprised of the front yard, the mid yard south yard, west yard, No. I west yard, No 2 west yard. No. 3 west yard and the back garden. Blind passes connect all the yards and major halls and houses. The design of the compound is exquisite and delicate and the building simple and elegant. 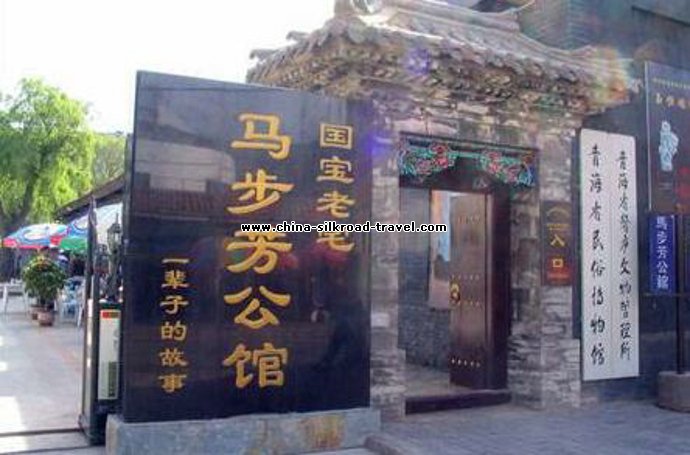 Brief introduction of Haidong
Haidong is the easternmost division of Qinghai province. It is bounded by Xining, the provincial capital, to the West, the Datong River Valley to the north, Gansu to the east, and the Yellow River to the south. Mountain ranges tower above the district of which the main valley is the one of the Huang Shui (Tib. Tsong Chu), a major tributary of the Yellow River. This valley stretches from west to east and makes up - together with the area around Xining, the landscape which is called Tsongkha ("Onion Valley") by Tibetans. It has a total area of 13,100 square kilometres (5,100 sq mi)


Popular attractions:
1. Beishan Tulou Taoist Temple:
Beishan Tulou Taoist Temple, also known as "Northern Buddhist Temple", is the earliest religious building in Qinghai Province. The temple has diverse landscape blended with Buddhism and Taoism. The old buildings are hidden among green pines and cypresses and flowers neatly and orderly The existing buildings are the Palace of the Queen Mother of the West, Lingguan Palace. Xuannu Palace, Cheng Huang Palace, Sanqing Palace and so on.


3.Mengda Heavenly Pond
Mengda Heavenly Pond is located 150 kilometers from Xining In the east of Jishi Town, Xunhua County, with an area of 20 hectare and a depth of 30 meters. The pond is enclosed by 550 kinds of ancient trees, including spruce and Huashan pine. Some rare animals and birds can be seen in the dense forest, including blue sheep and snow cocks. As a perfect health resort, this area has become a nature reserve。
As a unique autonomous county mostly settled by the Sala minority group in China, Xunhua has a population of 120, 000 including Tibetan, Hui and other ethic groups. The Sala nationality itself makes up 62 percent of the whole county's population. Due to the gentle climate and the sufficient sunshine, Xunhua abounds with fruits, chili, Chinese prickly trees and waters recognized as Jiangnan in Qinghai(literally, Jiangnan means the large humid area separated southward from the Yangtze River). The characteristic natural site ethnic culture and the affluent tourism resources provide original features for the future development.
Mengda includes a forest region area of 140,000 Chinese acres with fluctuating hills, particular topography, from 1780 to 4180 meters above the sea level. As a consequence of different monsoons influence, there is abundant rain fall, a moist eliminate and fragrant grass. The luxuriant forest is a rare plateau green treasure house worthy of the reputation"natural botanical garden". According to the scientific statistics, more than 250 kinds of ants are found in the Mengda forest region. Many plants from the subtropics, the warm temperate zone, the cold temperate zone and the sub-frigid zone, can be found here, such as the subtropics Taiwan Chinese juniper, the warm temperate zone undertaking spice bush. the Qinghai-Tibet Plain firewood fruit spruce and the big fruit cloud cypress, and so on. The natural preserve region also has precious raw material for medicine, as many as 120 types; each kind of medicinal plant has many unexpected varieties. The shiny-leaved yellow horn, red auspicious wood, wool hazel, as well as many outstanding lumbers, and various fiber plants  are everywhere. 100 kinds of wild decorative plants and flowers can be classified, such as spiraea, lilac, red cuckoo, big leaf hydrangea, hypericum, wild rose, and so on. There are also many rare and precious animals, including pere-david's deer and blue sheep, as well as tiger, bear, and so on. Each species of bird includes 30 sub-species people call this area "Qinghai's Xishuangbanna.

The Mengda forest region has not only luxuriant plant life and unusual animals, but also natural beautiful scenery. Here we find lofty strange stones, dangerous peak cliffs. The natural river feeding a and strange flowers and grass pervading the mountain valley The frog stone, "a day", " the napped outlier, the echo cliff, five waterfall, sub-worships Buddha stone"and other sorts of wonderful stones are unique and unusual, rising vividly. Particularly charming is Heaven Pond located in the belly of the mountainous area, Just like a crystal like a splendid attractive pearl in appearance. Fog regularly encircles the periphery like Western Paradise. More than 400 square km of this area is mountains lakes, with a water depth of 30 meters, limpid clearness like a mirror, the lake and mountain scenery balancing each other as one The light vessel movement, the water sound, and the leaping camp all give the infinite pleasure to the senses. Everyone who comes here tom mountaineering, will feel completely relaxed and forget to return home "Mengda Heavenly Pond"is a winning place of the Mengda forest region.
The State Couneil has already set aside Mengda forest region as a nature protection area. The local government has constructed the roads built the guesthouse and the sanatorium, and the plan is to develop a tourist site in order to attract more Chinese and foreign tourist to view Mengda's beautiful scenery. The Mengda forest region is located at
the Bayan 'branch on the northeast edge of Xining: geographically, it belongs to Wutai Mountain area. As a consequence of its unique topography, its meeting the summer southeast monsoon makes it possible to hold the massive water vapor in the air current, so that a forms the nimbus cloud in the forest land sky, causing more abundant rain water to fall on the forest region. The mountain canyon and the Heavenly Pond make the forest region preserve a temperate climate by forming a basin the air is moist, and the soil is rich. As the ideal As the ideal ecological environment for plants' survival, plant reproduction is given very advantageous climate. The forest region has 89 kinds of seed plants, 530 kinds of other plants, as well as 10 kinds of ferns seed Some kinds of plants can not be found in other provinces, such as warm needle pine. the Chinese pinups Montana, the hard Liao Dony oak tree and Prasarn fir tree, as well as the spice bush and Huajie bamboo. which the panda prefers to eat. The Mengda forest region has 300 kinds of the medicinal plant, among which only 81 kinds are written down in the national pharmacopoeia. 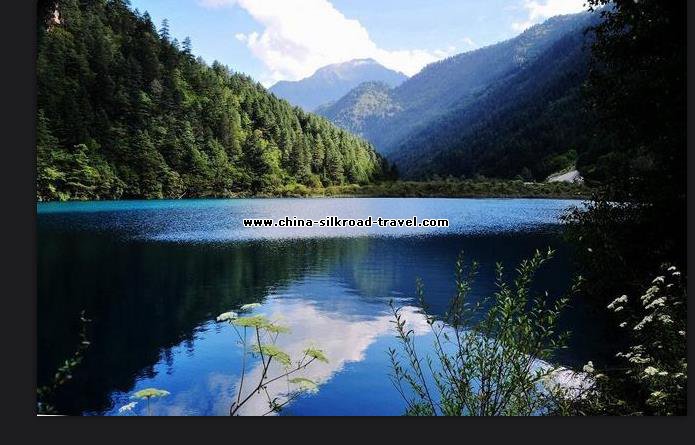 When to go:
The best time to travel to Xining is from: May to October.